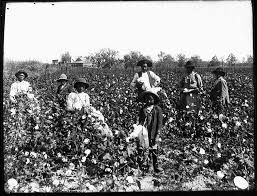 📱 Get out a calculator. Type 1865 ➕ 79 ➕ 79 = 2023.
Nearly two average American lifetimes (79 years) have passed since the end of slavery. ONLY TWO!
Slavery didn't end FOREVER ago. Many of our grandparents were sharecroppers after slavery ended. Some of our parents attended segregated public schools.
No matter how we slice it, this country was built on slave labor that propelled America to dominance in the world economy.
Cotton produced under slavery created a worldwide market that brought together the industrial textile mills of the Northern states and England and the cotton plantations of the American South. And they all thrived TOGETHER!
As America’s cotton sector expanded, the value of slaves skyrocketed. Between 1804 and 1860, the average price of Black men ages 21 to 38 sold in bondage grew from roughly $450 to $1,200!
Just before the Civil War, the Mississippi Valley was home to more millionaires per capita than anywhere else in the US. Cotton grown and picked by slaves was the nation’s most valuable export. The combined value of slaves exceeded that of all the railroads and factories in the nation.
Slavery is America's original sin and first big business. And its legacy lives on TODAY!