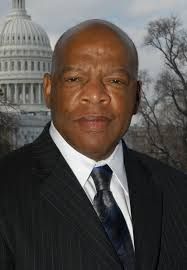 Rep. John Lewis said he was smiling in this mug shot because even though he was arrested, he knew he was on the right side of history.
Think about THAT the next time people call peaceful protesters "thugs."
John Lewis went from being the youngest leader of the 1963 March on Washington to becoming a long-serving Georgia Congressman and icon of the Civil Rights Movement.
Lewis was a committed participant in key events of the movement — an original Freedom Rider in 1961, a principal speaker at the March on Washington in 1963, and one of those brutally clubbed during a 1965 march in Selma, AL.
Through it all, he faced taunts, beatings and DOZENS of arrests.
In 1987, he was elected to Congress and was often referred to it as its “conscience.” Years later, he witnessed the inauguration of Barack Obama, the first Black President.
“Generations from now, when parents teach their children what is meant by courage, the story of John Lewis will come to mind,” Obama said when awarding Lewis with The Medal of Freedom in 2011.
“An American who knew that change could not wait for some other person or some other time; whose life is a lesson in the fierce urgency of now."
Rest in Power, Rep Lewis. ❤ ✊🏽