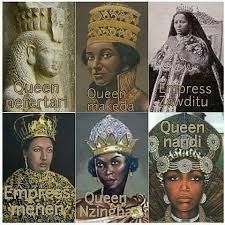 🤔 I've heard some pretty bizarre stereotypes about Black women from seemingly intelligent people on LinkedIn over the part few months, as I post about social justice and racial equity.

🙄 I've heard that Black women are the "downfall" of the Black family because we "prefer" to raise children in single-parent households...
🙄 I've heard that not wanting to "code-switch" in the workplace means I want to "wear tight braids and pop gum" at work...
I'm not quite sure where these ideas come from. Maybe "Love & Hip Hop?" I'm NOT a Welfare Mom or a Round-the-Way Girl. BUT even if I was, I'd STILL be a Queen because that is my legacy. Do your research!
👑 Queen Nefatari - Egyptian queen, who was highly educated, using these skills in her diplomatic work.
👑 Queen Makeda - Known to the world as the Queen of Sheba, representing the nation that is now called Ethiopia.
👑 Empress Zawditu - Empress of Ethiopia from 1916 to 1930 and the first empress regnant of the Ethiopian Empire.
👑 Empress Menen - Empress consort of the Ethiopian Empire and the wife of Emperor Haile Selassie.
👑 Queen Nzingha - Queen of Ndongo and Matamba (1624 - 1663), located in present-day northern Angola.
👑 Queen Nandi - Mother of the famous King Shaka Zulu.